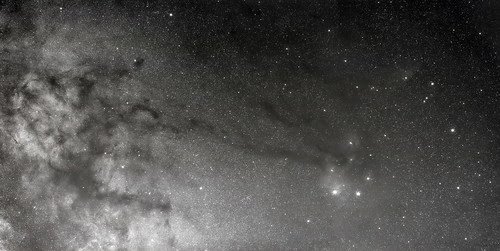 Black and White Dreams, a photo by Nightfly Photography on Flickr.

For some time I have been wanting to produce a tribute to the great Edward Emerson Barnard with a set of B&W photographs captured in very much a similar manner as Barnard himself had completed over 100 years ago. Barnard was a pioneer in the field of astrophotography, indeed often attributed as the Father of Milky Way photography.

In June and July I set out to produce an initial effort to produce such a photograph. Although not the first B&W analog image I have taken on, this image is the first in a series just for this project.

This image, a mosaic of two frames, was taken on one of the shortest nights of the year and with sky conditions deteriorating as night turned to morning.

Featuring the Milky Way of Ophiuchus and Scorpius with many of the dark nebulae recorded and cataloged by the great Barnard himself, this image is markedly wider. This is due in part to being a mosaic, as the two images themselves have been taken with as Barnard did, with a portrait lens.


From the observatory notes:


My observatory notes from that night:

"Clear with threat of fog. Transparency average, becoming poor with sky becoming brighter by early morning. Transparency became very poor by end of run. I continued as stars were dimmed, but not condensed. All frames used the SMC Pentax 200mm f/4 @ f/5.6 and B+W 021 light-yellow filter."

Average SQM reading for my astrophotography site are on average, 21.5 mags/sq-arc-sec. So the night was much brighter than average.

Perhaps the filter helped with the low contrast sky, which was muddy in appearance. I stuck with it and I'm glad I did. I might not have if I was using color transparency film.