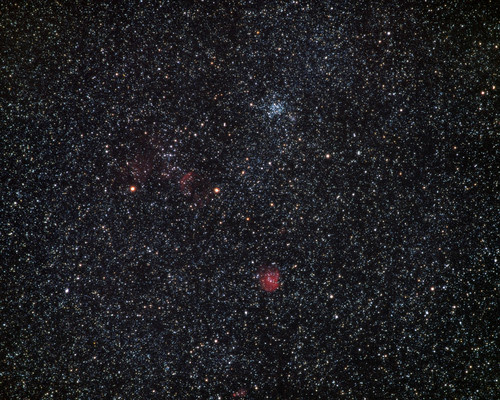 The constellation Gemini features a treasure trove of deep sky objects. Most popular is the rich open cluster Messier 35. M-35 can be seen with the unided eye on a cold winter's night, binoculars and small telescopes give a most pleasing view. Scattered throughout the field are numerous nebulae, some of which can be seen here, including NGC-2174, The Monkey Head Nebulae which straddles the Gemini / Orion border. 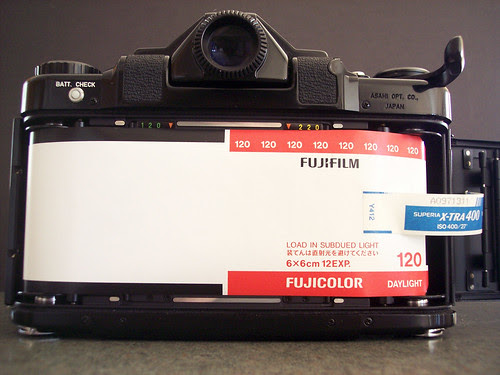 Superia X-TRA 400, a photo by Nightfly Photography on Flickr.

The "new" Superia X-TRA 400 120 format color negative film is available in Japan and the UK. It is also imported to the USA through a handful of dealers. I purchaes a couple pro-packs to run through its viability as an astrophotography film. The data sheet looks good as its spectral sensitivity in both the desired red (Hydrogen-alpha) and blue. The spectral and reciprocity charts looks identical to the well regarded Superia 100.

A planned sequence of exposures begins tonight using the well known targets of Orion, Monoceros, and Gemini. If the film records as well as its 100 speed cousin, exposures of 30-60 minutes at f/4 should provide a good negative to scan with a wealth of detail and faint nebulosity. At less than $4.00 a roll it may also prove to be the cheapest astro-film out there.

A new roll is seen here from the backside of the Pentax 67.