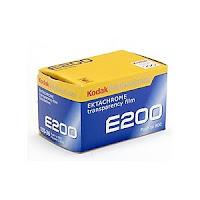 Kodak will likely continue to streamline its film lines with the eventuality of having one or two available emulsions for color negative, color chrome, and black & white.
Posted by Jim at 6:37 PM No comments:

Last Autumn the photographic world was buzzing with Kodak announcing a new 400 speed color negative film.  This new Portra film replaces Kodak's venerable Portra 400NC and 400VC line.  The first thought on my mind was whether or not this film would be good for astrophotography?  The technical specs showed good sensitivity to the desireable Hydrogen alpha emission line at 656nm, a prerequisite for deep sky astrophotography.

I exposed a 120 roll of the new Portra in December and January.  The usual test target this time of year- Orion.  Three exposures using the Pentax 67 and the 165mm f/2.8 lens riding piggyback.  SQM reading for the night of this test were 21.41 mags/sq-arc-sec.  The air temperature was 20 degrees F.  An average night for my location.  The film was processed by Color Services in February.  Negatives were scanned by myself on an Epson V600 scanner.
﻿﻿﻿ The film reached sky fog level very quickly.  The 30 minute exposure at f/4 showed more density in the original negative versus the reciprocal exposure of 15 minutes @ f/2.8, vignetting notwithstanding.  H-alpha response was fair﻿﻿﻿, blue was good, but all colors seemed muted.

﻿﻿
While the film recorded many faint features in the area, such as the Witch Head nebula near Rigel, colors were rather muted compared to a really great negative film, Superia 100.  Perhaps a few tricks in post processing could bring out better detail and colors.  This is a preliminary test and I suspect better results could be obtained with longer exposures.  Granted, the objects in this field, with the exception of the Orion Nebula are pretty faint.  Perhaps a brighter target may make this film shine.  Indeed I get the feeling that this film would do well on the brighter Summer Milky Way.

Another exciting possibility for this film is the avaialbility of large format sizes.  Portra 400 is available in 4x5 and 8x10!  Someone ought to try it.  Large format camera lenses have slower f-ratios and need fast film if used for astrophotography.


Under the Light of the Moon﻿
Another test for those of us that shoot under moonlight was more encouraging.  Colors were very good, and very accurate.  Shadow detail was very impressive.  I did not do any reciprocity tests.  Stephen Schaub over at The Figital Revolution has tested this film extensively and it is well worth a look to see his results.

Other photographers using this film have reported amazing ISO range. Yes ISO range.  You can expose this film from ISO 100 to 1600 with very good results without pushing.  Only time will tell how good the new Porta 400 will work in a variety of settings, but I am very impressed with it.  Grain was the best I have seen in a 400 speed film, colors were neither saturated or muted when exposed properly.  It is perhaps not the best film for astrophotography, but it is perhaps one of the best all-purpose films around.  I'll be shooting more Portra and I will come back and review it again once I can expose this film under the light of Sagittarius and other summertime goodies.
Posted by Jim at 7:35 PM 4 comments: