Legacy Astrophotography: The Milky Way, a photo by Nightfly Photography on Flickr.

The Milky Way from Scutum to Cepheus. I had longed dreamed of puting together such a mosaic. It was one long night in September, and on a work night no less! The first exposure started at 9:17 PM and the last exposure ended at 1:28 AM, the next morning.

A mosaic of 4 panels, each a 60 minute exposure using a Pentax 67 with 105mm f/2.4 lens at f/4.8, Fujicolor Superia 100. Due to unmanageable color gradiants I decided to convert to b&w to make it publishable. It qualifies for the coveted Legacy category.

The original could make a poster as tall as an interior wall, say 2' x 8'. 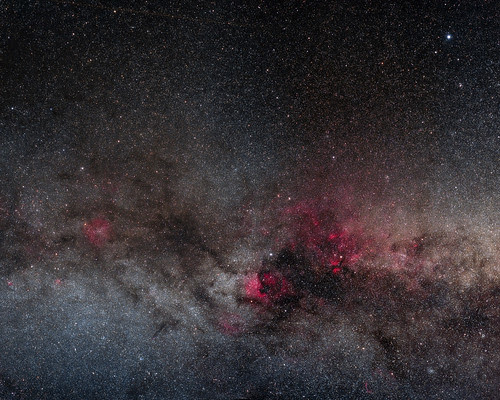 It is the end of the road for the Great Rift. The rift ends at the "Northern Coal Sack" just south (right, in this photo)of Deneb. LeGentil 3 (left of center) is often mistaken for the NCS, but as you can see it is not as dark and opaque.

A mosaic of two frames, each a 60 minute exposure using a Pentax 67 with 105mm f/2.4 lens stopped down to f/4.8 and utilizing Fujicolor Superia 100 (CN) photographic film. 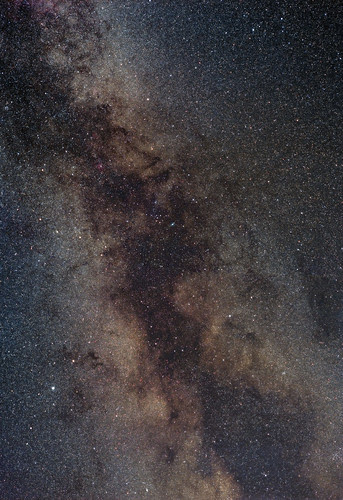 I was fortunate to get a night where I could compose two long exposure photographs of our Milky Way's Great Rift, utilizing an equatorial platform.

You will note that Comet Garradd is located just west of Brocchi's Cluster.

A mosaic of two frames, each employed the use of a Pentax 67 camera and 165 f/2.8 portrait lens stopped to f/4.8 and a 60 minute exposure on Fujicolor Superia 100 (CN) photographic film. The two frames were scanned on an Epson V600 and assembled in Adobe Photoshop.


The Legacy Project is a planned sequence of photographs of the night sky. Over the last several years astrophotographers have switched to digital as the medium of choice. While there are many reasons to do this, film is still a great way to capture wide-field images of the Milky Way and the sky in general.

The project's mission is to continue film's "Legacy" as a medium for long exposure images of the night sky.

The sequence of photos started in October 2009 and will end at a point yet to be determined.

Great care has been given to compose, expose, and process each image. Only the best combination of film, lenses and exposure times are used.

Each image is shot under the dark skies of my home in Maine.

My goal is to produce the finest images obtainable with film emulsions.