Ophiuchus / Scorpius / Libra, a photo by Nightfly Photography on Flickr.

On the same morning while waiting for the Antares region to rise and clear the treeline, I decided to capture the region just west of the area. The same setup was used (165mm @ f/4.8 45 minutes exposure) to capture southern Libra. I had planned the sequence the night before. This mosaic is processed somewhat differently from the original post, trying to maintain the advantages of the film medium with subtle detail revealed. Autostitch was used to blend the two frames.

The next outing will try to form a four frame mosaic, which will include the same region represented here, plus two additional frames further east to include the Sagittarius region. Now that would be something wouldn't you say?

Notice how this frame details the Milky Way's central bulge tapering off into space and entering the galactic halo region, home of globular clusters. Can you spot globular cluster NGC-5897 in the right side of this image? Look sharp! 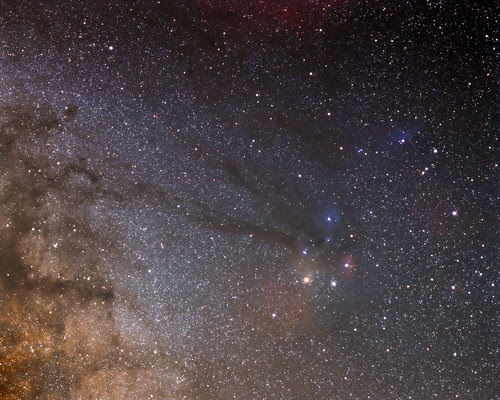 Ophiuchus / Scorpius Region, a photo by Nightfly Photography on Flickr.

I'm back to exposing E200 again. Such a great film for astrophotography. Legendary at this point.

The region of Scorpius and Ophiuchus taken on an early morning on March 22. The detail is such that one will never tire of shooting this area.

Traditional film users have a thinning line of film to choose from these days, but there perhaps has never been a better time to shoot black and white emulsion.  Combined, manufacturers such as Ilford, Rollei, Fuji, and Foma have a formidable line of film for the working artist.  Even Kodak maintains a line of products for b&w shooters.   Kodak released its newest version of T-Max 400 in 2008.  A panchromatic film utilizing Kodak's proprietary tubular grain structure offering high speed and fine grain.  While most, if not all of today's b&w films lack the red response associated with Technical Pan film, many record starlight extremely well, this is especially true of T-Max 400.  T-Max offers very good sensitivity to starlight and records stellar images very well.  Kodak claims improved reciprocity compared to the original T-Max 400 of yesteryear.  That being said, T-Max 100 specifications show it to be even better in the reciprocity department and will surpass the speed of its 400 speed cousin in a matter of a several minutes.  A test of T-Max 100 will take place later this year.  Below are a few images obtained on March 10, 2012 from my dark sky home in Maine.
﻿
﻿


This image of the Milky Way in Puppis clearly shows the benefit of T-Max to record faint stellar images.  This film will do well for open star clusters and the star clouds of summer.  When enlarged, the grain was remarkably tame.  Halation was not a problem.  The bright stars did produce overly sized spot images, but this was an aberration present in the lens used.


Black and white astrophotography can still be done in the 21st century.  I found the experience rewarding and I am looking forward to years of future work with films like T-Max 400.﻿
Posted by Jim at 10:00 PM 7 comments: 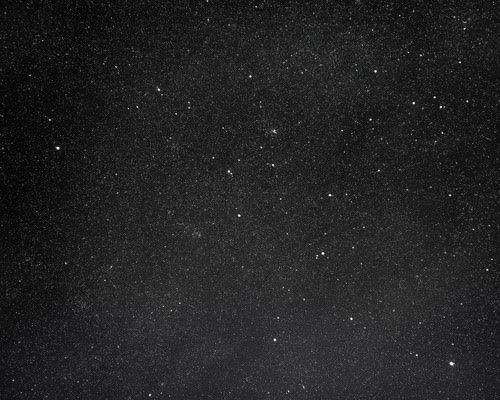 Puppis Milky Way, a photo by Nightfly Photography on Flickr.

The rich starfields of Puppis are often neglected by northern hemisphere observers / photographers due to its southerly declination. This view here was captured just above my treeline at my home in eastern Maine.

I employed the use of my Pentax 67 medium format camera with a 300mm f/4 lens stopped down to f/5.6 and 30 minutes exposure on Kodak TMAX 400 black and white film. The camera was piggybacked onto an 8" SCT for guiding.

The negative was processed professionally in Kodak XTOL developer. It was then scanned by myself on an Epson V600 scanner. The image file was then imported into Photoshop for basic level adjustment and slight cropping.

Some time ago Fujifilm released its Superia XTRA 400 film in 120 format.  I had just seen a result using this film in 35mm format a few years ago on the Yahoo Film Astrophotographers Forum﻿ with promising results.  I had purchased 2 pro-packs at the beginning of the year from the only supplier I could find, Amazon.com.  At only $19.99 per pack of five rolls, it was economical for an imported film that is common in Europe and Japan.

Well as you may well know, over time film makers change back and forth film formulae that end up giving good Ha performance to poor Ha performance.   The results here is somewhat mixed, I had expectations that it might be similar to Fuji's Fujicolor 100, also known as Superia 100, perhaps the best negative film for astrophotgraphy in recent history.

The poor response to faint Ha emissions is evident in this longest exposure of the set.  ﻿Stellar recording power was admirable if not for the garish rendition of the night sky.  There is much recorded on the film and the results could be converted to black & white as this film does have good luminance reciprocity.
﻿
﻿

A more promising result came with a frame taken on an early morning near the end of February.  It was nice to visit with an old friend normally reserved for late spring.  Note the good blue and yellow response as well as the good recording power revealing the dark streamers heading east. It is likely that this film could produce very pleasing results in the very bright regions of Sagittarius and Ophiuchus. 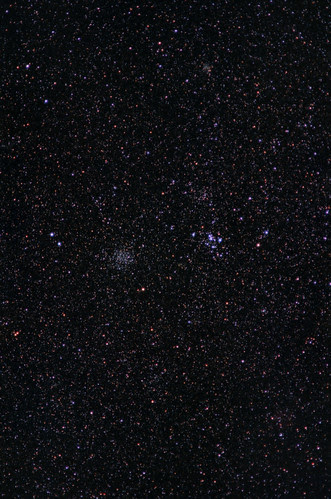 Messier 46 and 47 in Puppis, a photo by Nightfly Photography on Flickr.

Messier 46 and 47, a beautiful pair of clusters in Puppis, one relatively young, the other ancient. A fine view in Binoculars on a late winter or early spring evening.