The summer has been a busy one.  Most clear nights have been spent inside sleeping and prioritizing daytime activities.  We all get out of practice with the things we love to do.  Late Saturday, my dog Hunter and I decided to get busy and setup the scopes and other equipment to ready the evenings observing.

This weekend was a great time to take in the great sky we live under on this perch called Earth.  The Milky Way arches high overhead at dusk, but low in the southwest lingers the galaxy center and it's full blown spectacle that is the Sagittarius Milky Way.  From the observatory, the center of our galaxy sinks behind the trees as seen from my front yard. A sure sign that autumn is near.


A challenge objects in the late summer sky, NGC-6822, the famous Barnard's Galaxy, was near the meridian, ideal for seeing this elusive object.  I had not looked for NGC-6822 in years and thought it invisible, but I knew that with a wider view I may find it.  I had obtained a set of 16x80 binoculars in April and it was such an instrument that would allow me to find large faint objects.

A quick consultation to a star atlas that plots Barnard's Galaxy and pointing the binocular to that region provided nearly immediate success.  Sure, it was faint, but it was there!  Nothing to write home about, but the soft glow, oriented north-south and the gradually brightening toward the middle matched the description of what to expect in the binocular.  A check with the star field and a panning of the 13" Dobsonian allowed a deeper investigation.  It stood out gently against the sky background and many field stars belonging to our own galaxy were superimposed over this object.  There was a granular appearance toward the middle, but otherwise just a larger version of what I had seen in the binocular.

The sky was ablaze with so much to see.  Old friends like The Ring Nebula in Lyra, the Great Hercules Cluster, and two of the best galaxies in the night sky, the Great Andromeda Galaxy and the Pinwheel Galaxy.  Both galaxies were impressive in the binocular.  Andromeda filed the field of view of the 16x80's.  The Pinwheel revealed it's face-on spiral nature, and both views were most satisfying.

It was after 1:00 A.M. and the Pleiades were just starting up over the tree canopy to my east.  In the binocular, the Merope Nebula was obvious and wisps of fainter blue tangle were suspected throughout the brilliant blue star cluster. A quick shot with the camera revealed more splendor.

At 2:00 A.M. I  was off to bed.  Dew had covered everything and I was ready to retire.  The stars will have to wait until next time, but we can always return to them.

Back in late June I spent an evening at Schoodic Point along with the full Moon that occurred during the summer solstice.

In this photograph the full summer Solstice Moon of 2016 lingers low and casts the Great Path onto the Atlantic Ocean as seen from the Acadian coastline. 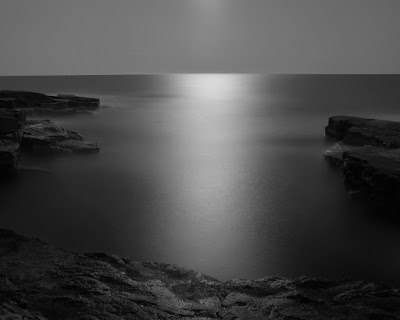