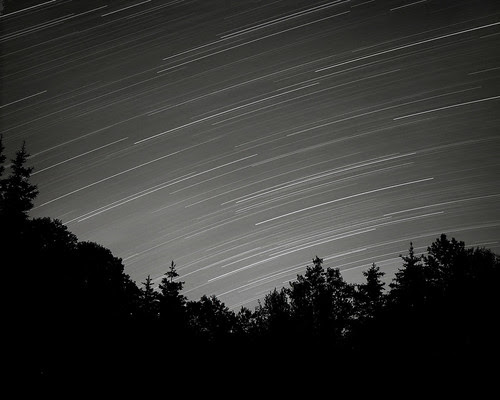 Scorpius Trails, a photo by Nightfly Photography on Flickr.

Via Flickr:
Looking SSE as the mighty scorpion rises above the tree line at my dark sky home in Maine.


Sometimes, a night of observing and just shooting a few star trail images is what makes a perfect evening. With all this astrophotography stuff, I've been avoiding the pleasure of the telescope. Nice to stop and smell the roses once in awhile.

It was early June, the Pentax was loaded with Acros 100 and I simply found a good area to setup along my driveway looking SSE toward rising Scorpius. This exposure went for 80 minutes at f/5.6 under a dark sky. The Milky Way provided a bright "background" as southern Ophiuchus eventually came into the picture.

I recommend shooting star trails to those that do not have guiding capabilities who want to make interesting and beautiful images without much fuss. Take the camera out and find interesting landscapes or natural monuments wherever they may be. Shoot under dark skies or even under moonlight. Just get out and shoot!

Legacy Astrophotography: IC1396 in Cepheus, a photo by Nightfly Photography on Flickr.
The Legacy Project continues: A rework of an old image taken in September 2008. E200 was employed to capture the faint details of Cepheus. With the nebula overhead, there was little between it and the camera as far as atmosphere is concerned. 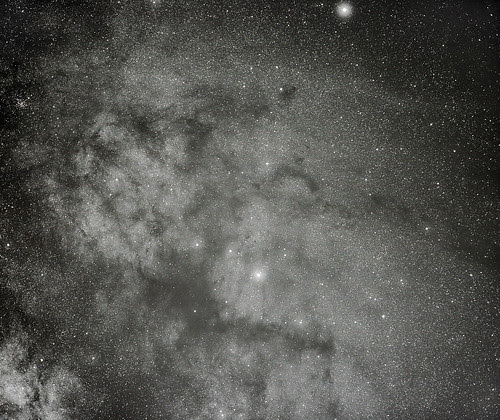 The Prancing Horse, a photo by Nightfly Photography on Flickr.
This region in southern Ophiuchus is perhaps the most celebrated area of dark nebulae in the sky. Revealed as E.E. Barnard would have done it, with black and white film.  High cirrus clouds bloated bright stars.

This is the first time trying Fuji Acros for this particular region of the Milky Way.  Conditions were not the best, but I am generally pleased.  The film lacks a response to Ha emissions, but that does not hinder its performance in starfields such as these that have no emission nebulae.